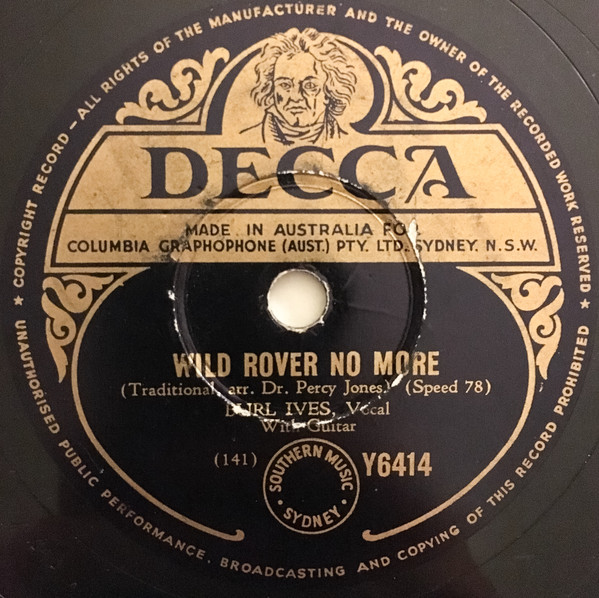 Basically an Irish nursery rhyme about a prodigal son. What was written as a temperance song, turned out one of the loudest sing-alongs imaginable. Popularity among Irish (and even far beyond) can be measured in parodies circulating galore. In 1952 Burl Ives was invited to tour Australia, which made him studying songs, resulting in album Australian Folk Songs released on Columbia in '58. Three titles were released on a 78 locally in '53, Wild Rover No More being one of them. According to A.L. Lloyd this song survived better overseas than in England and Ireland. In 1924 it was published in Banjo Patterson's songbook Old Bush Songs. That was long before Irish groups made it their own.

Paul Clayton [as The Wild Rover for Folkways]

Sam Larner [idem; seaman from Norfolk (°1878) who became a folk icon; from his album Now Is The Time For Fishing, recorded by Ewan MacColl & Peggy Seeger]

Louis Killen [who passed it over to Luke Kelly; Louis was inspired by an example from Nova Scotia]

Dominic Behan [as The Wild Rover]

Pogues [as The Wild Rover]

Dropkick Murphys [as The Wild Rover]

British folklorist Seamus Ennis collected many versions in the early fifties, ending up in archives.