WORLD IS TURNED UPSIDE DOWN, THE 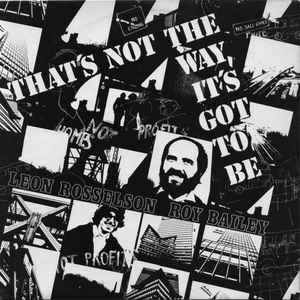 With Martin Carthy on lp That's Not The Way It's Got To Be. Subtitle: The Diggers Song. About a group of Quakers who in 1649 collectively decided to cultivate common land on St. George's Hill (near Woking) as some sort of Utopia, while also proclaming a Declaration From The Poor Oppressed People Of England. By 1650 their rebellion was broken. Lyrics based upon the writings of Gerrard Winstanley on this topic in 1894. St. George's Hill is now a gated community. Ringo Starr lives there.

Dick Gaughan [on Handful Of Earth]

Billy Bragg [on EP Between The Wars; top 20 UK]

In 1941 Rosselson arranged another Diggers ballad Stand Up Now You Noble Diggers All, also by Gerrard Winstanley and also covered by Chumbawamba (1988).