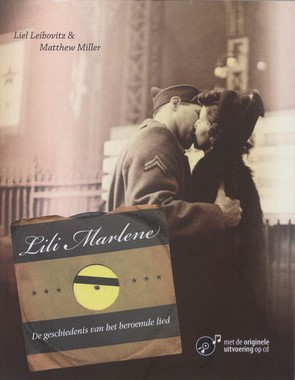 Words by Hans Leip, a German soldier on his way to the east front during WW I. It's a poem to both of his girlfriends as he couldn't choose between them: Lili, his sweetheart at home, daughter of a Berlin business man, and nurse Marlene, his sweetheart at war. During his vigil at night those first three lines came in a flow: 'Vor der Kaserne, vor dem grossen Tor, unter den Lanterne'. But he waited twenty years before giving it the finishing touch. First published in 1937 in the poem collection Die Kleine Hafenorgel (The Little Harbor Organ). Lale Andersen, singer in night clubs and literary cabarets in Munich and Berlin, loved the poem and sung an unsuccessful version with music composed by a friend (Rudolf Zink). Then she found out composer Norbert Schultze (prominent nazi propagandist) had done a better job with ten Hans Leip poems, Lili Marleen being one of them. Bariton Jan Behrens had given Norbert Schultze a copy of Die Kleine Hafenorgel, in need for some sea songs. What Schultze made out of Lied eines jungen Wachtpostens was turned down by Behrens for sounding too feminine and that's when Schultze contacted Lale Andersen. A first recording sounded too sentimental, not at all military. That's when they decided to add the signal announcing curfew up front (Zapfenstreich), convincing Electrola. The first time this version was aired was November 9, 1938, date going down in history as der Kristallnacht!

Lale Andersen [English version; lyrics: Norman Baillie-Stewart; for becoming too popular she was refused to sing her own song in public; that's when she let her public took over]

Suzy Solidor [French version; post-war victim of repression for singing it for an audience of German officers in her cabaret]

Anne Shelton [as Lilli Marlene; English version, translated by Tommie Connor (of I Saw Mommy Kissing Santa Claus fame); she was only 14 at the time]

Pete Seeger [as The D-Day Dodgers]

War hit on both sides of the line, adopted by both armies. Soldatensender Belgrad, the nazi propaganda short-wave station spanning the whole of western Europe and North Africa, had Lale Andersen's song on the playlist since 1941. Rommel's Africa korps picked Lili Marleen up as their musical mascotte, but so did the English. Following excessive requests, Radio Belgrad programmed the song dayly in a fixed time scedule (9:57 pm). That's when Lili Marleen became a phenomenon. Lili Marlene: The Soldiers' Song Of World War II, is the title of a book about this one song exclusively, written by Liel Leibovitz & Matthew Miller (2008 - W.W. Norton).